Mistresses give bully taste of his own medicine

Mistress Bruh and her friend lady Stefany were told of this guy who was rude and a bully. They hate bullies and had just moved into the neighborhood. They knew going after the head of the bullies would send a message to the rest so they did it. The mistresses made a video of how they kicked him and they trampled him while twerking and having fun at his expense. They sent it to the other bullies and told them the same fate awaited them.

Princess Serena caught her boyfriend sleeping when he was supposed to go job hunting. She did not want him to get comfortable being at home. He had lost his job in a downsizing operation and he felt sorry for himself and did not get up and aggressively look for work. So she forced him to do it by trampling him every morning. It reached a point he could not take it anymore so he went looking for a job. 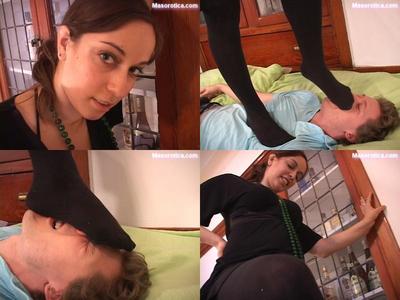 Mistresses force guy to pay debt by trampling him

This mistress was broke and she wanted her money back. This guy had borrowed money from her many months back but he had not returned it. She was pissed and she went to his house and she crushed his head and trampled it to force him to give it back. She was with her friend and the two mistresses enjoyed trampling his body till he agreed to give it to them.